ABOUT REPATRIATE THE CHILDREN

Repatriate The Children - Denmark is an organisation that advocates for bringing home the Danish children and their families currently living in Kurdish-controlled prison camps in Syria and neighbouring countries. Repatriate the Children – Denmark is inspired by the Swedish organisation by the same name. Our particular focus is the welfare and repatriation of the children in the prison camps. The Danish branch of the organisation was founded by journalist, Natascha Rée Mikkelsen, in September 2020, after her most recent visits to the Syrian prison camps, al Hol and al Roj.

Over the years, Natascha has been in contact with relatives of the imprisoned Danish children and their parents. She has visited the camps and the surrounding areas numerous times. In the winter of 2020, she was in Syria while working on a documentary for Danish TV2. She travelled with the sister and mother of a Danish woman, who is currently incarcerated in al-Hol with her two small children. A few months earlier, Natascha accompanied the relatives of an 11-months-old orphan in bringing him home to Denmark from Syria. Today, he is a healthy toddler. Denmark has only brought home one other child, a severely ill 13-year-old boy. Currently, there are still about 25 children with relation to Denmark living in the Syrian prison camps.

The Danish government has refused to for many years to repatriate any further Danish children from the prison camps. In May 2021, however, the government changed its position and decided to bring home 14 of the Danish children along with their mothers. The remaning children have no prospect of returning. Currently all of the children and their mothers are still prisoners in the camps in Syria 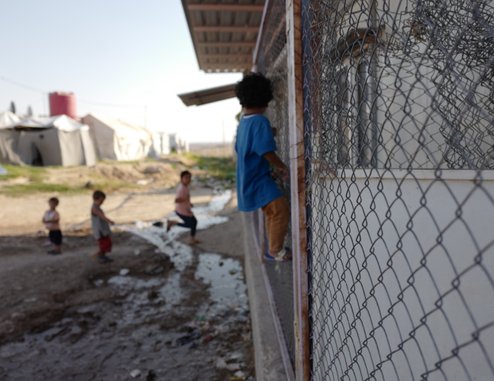 The organisation aims to support and advise the relatives of the children, share our experiences and contribute with knowledge and information to decision-makers, relevant authorities and organisations that work with this subject.

The organisation strongly dissociates itself from the ideology, actions and violent extremism associated with Islamic State, and it works to protect the children from indoctrination and radicalisation by violent extremist movements and environments. We believe that no child should grow up under the influence of Islamic State or other extremist movements. We are concerned about the conditions under which these children live. Child mortality is high in the Kurdish-controlled prison camps in Syria, and there is a lack of fundamental necessities such as food, clean water and medicine. We want to involve organisations, networks and stakeholders in other countries to find the best possible solution for the children

WHAT ABOUT THE PARENTS AND STATE RESPONSIBILITY?

We do not wish to separate children from their parents. The Autonomous Administration of North and East Syria (AANES) has made it clear that they cannot separate a child from its mother unless the child is at risk for its life. We trust that the Danish authorities will be able to decide what is best for the children when they return to Denmark, to ensure that they have the opportunity to grow up in a safe environment, far away from violence and extremism.

The Kurdish local autonomy state that they do not have the resources to keep the prisoners, which has also been shown in the fact that escapes and smuggling are increasing. At the same time, reports indicate that Islamic State is reclaiming land and carrying out acts of violence and terrorism. In January-May 2020 alone, Islamic State has taken on more than 600 attacks, in Syria and Iraq.

The Kurdish region in Northeastern Syria is struggling to get back on its feet after a long and devastating war. They have no functioning judicial system and are still not recognized as a state. This means that suspected members of Islamic State and their children have been living in prison camps in Syria for years - without having their case tried in a court of law.

The situation is unsustainable. Denmark should repatriate all Danes as soon as possible. Prosecution and rehabilitation are essential tools to break the cycle of violence and prevent more children from ending up in war zones. People who have been exposed to Islamic States violence must be protected and offered security. Therefore, it is crucial to help the victims of the terrible acts of Islamic State, by investigation and finding the evidence for the crime that has been committed